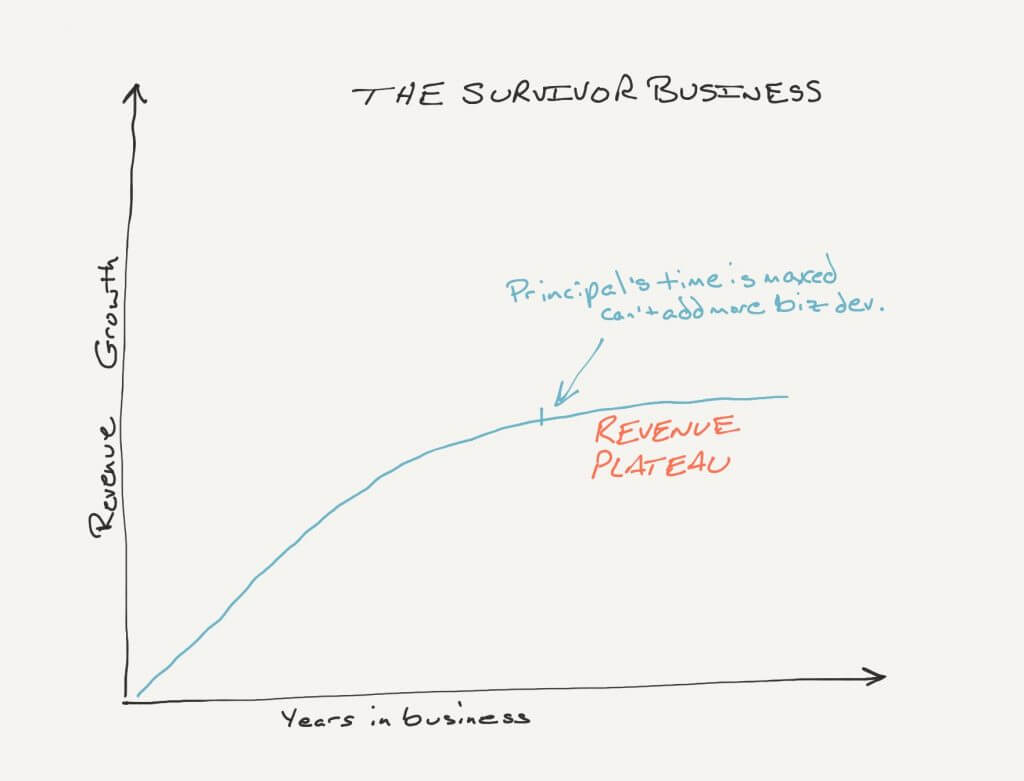 In the beginning, there’s growth. Sure it’s a struggle to get those initial clients, but you get to a point where you’re paying the bills—maybe not getting rich, but still…

And, you’re busy with clients. You landed them, and now you’re busy delivering so they come back (which is smart).

You’re still doing some business development, but the hustle you used at the beginning starts to get crowded out by the client work.

And let’s face it.

Most of don’t wake up and say “I can’t wait to do business development today!”

It’s not what you got into the business to do.

After a while, the growth plateaus.

That’s the point where you, as the owner, the face of the firm run out of hours in the day to manage the firm, deliver for clients and do biz dev.

Even if you’ve got a killer team and you’re spending 80% of your time on biz dev, you’ll still hit a wall eventually.

We’ll come back to this idea in a bit, and look at the ways I’ve seen firms try to escape the plateau, and look at what actually works.

First, I want to share the two kinds of firm owners I see.

You’re one of the two, the question is which one…

To be honest, this is me.

When I first got into a “selling” role, I was 28. I had just taken over my first firm as CEO—part of the founder’s ultimate exit plan.

I didn’t know how to sell. And, worse, I hated doing the work of business development. It was uncomfortable (at best).

We don’t want to be this guy…

I’ll explain why in a minute, but let’s take a look at the second type of professional.

The dabbler is a smaller group, but just as limiting to firm growth. Dabblers are doing everything.

And at this point in history, there’s no shortage of ways to try and market your firm.

Dabblers are trying them all…

And you know what. It’s completely understandable. It seems like this is what we’re supposed to do now, but it’s a trap.

And your prospects aren’t paying attention in these places.

I had a call with a firm owner last week. She’d had some decent success, but had hit a wall.