10 Essential Tools to Build Your Authority

Yesterday, I spoke to a group of 26 CEOs—businesses as small as $1-million in annual revenue, up to $1-billion. One of the CEOs recently bought another business whose strategy was to serve their ideal clients in all the small, out of the way places that the big competitors wouldn’t bother to go. Great strategy, just one problem he shared…

The Internet brought the big competitors to those out of the way places. He was now commoditized. In the group, he wasn’t the only one. Nearly everyone in the room was facing more competition now than ever before.

Maybe you are too.

It’s a real problem and it has two serious consequences that it brings:

In most professional service businesses, you don’t have 80% margins to begin with, so the squeeze can be significant and painful.

The Only Way Out is UP: Using Authority to Escape Commodity Hell

The only real way to escape is to elevate yourself and get above the fray. You’ve got to become THE authority that your market turns to. There are “tools of the trade” for creating authority positioning, that you’ll want to build into your marketing and your business.
Here’s the list, explained…

You’ve got to start somewhere and in our work with businesses that are going from “unknown” to authority, the very first and most important tool is the decision to create your authority position.

Authority is claimed, not bestowed. So claim it. Certainly, you need to have the requisite expertise to back it up, but in my experience, most business owners have knowledge and expertise in spades.

They just don’t leverage it in a systematic way to create the authority that will attract better clients and bigger fees.

Every professional I’ve ever met had very clear and specific ideas about how his or her profession should be practiced. It’s your “this is how we do it here” opinion.

Stop keeping it a secret. Share it with your prospects, clients, and partners. There’s a reason you do it the way you do it…because in your mind it’s the optimal way to deliver your service.

Why on Earth would you keep that a secret?

I won’t lie to you, it takes confidence to step out and claim your authority, publicly.

The good news…confidence is a developed capability. It’s easy to grow your confidence daily with a few simple practices.

OK, we got the “soft skills” out of the way. Let’s get practical…

Dan Sullivan of Strategic Coach says “He who names the game, wins the game.” When you begin to name the things you do for clients you begin to create a new, authoritative, and valuable way to describe the value you deliver.

Naming is one outward signal of your worldview. In fact, if you hang around here long enough, you’ll find we have an “Unstoppable CEO language.”

For our clients, each of these names encapsulates a proprietary process and our worldview in that area of our practice. When your prospects start using your language to describe what they want to accomplish, you know you’ve established authority in the market.

Let me ask you a question: Do you consider yourself a natural salesperson? Are you more comfortable with the delivery of your expertise, than the selling of it?

Most of the successful people we work with would answer “yes” to both questions.

The problem is that most of the advice you’ll find on sales improvement requires you to use scripts and techniques that rely on superior sales skills. That’s a recipe for failure. If you’re not comfortable, you won’t use them.

This is a powerful and under-used authority-building strategy. And, the most iconic story of a delivery system used to create authority position in the market is all about BEER!

Specifically, the Schlitz Beer marketing created by Claude Hopkins in the early 1900s.

Schlitz was struggling as the #8 brewer in the country. Every beer at the time was marketed as “pure,” which meant simply saying your beer was pure didn’t have any impact on sales (note: this reality exists in most industries…everybody says the same thing…it still doesn’t work).

In comes Hopkins, hired to create a new ad campaign for the beer. He asks for a tour of the brewery and immediately sees the solution. Make the process of purification visible to the market. Sure, it’s the same process used in every other brewery, but if you’re the only one telling the story, you own it. 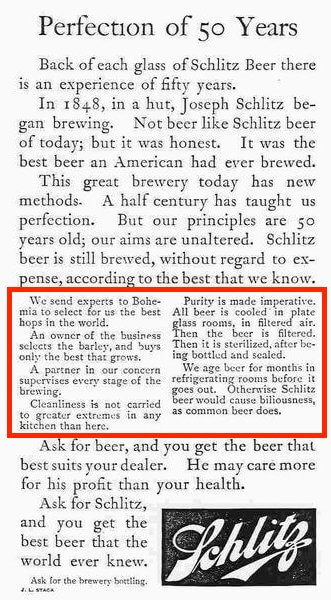 Schlitz went from #8 in market share to #1. Reveal your process.

7. The Fine Art of Showing Up

We give attention to the people who show up in our lives consistently and frequently. Attention is the first and necessary ingredient of authority.

Start showing up in your prospect’s world with something new, useful, valuable using publishing as your medium of authority. (When you publish i.e. speak to many at once, we assume you’re authoritative.)

Show up and be valuable at least monthly (ideally more often).

If you can meet with a prospect anytime the prospect wants the meeting, you’re not an authority. You’re desperate for business.

Control your availability through the calendar. Not only will you be more productive, you’ll have a less chaotic schedule, and you’ll create both the perception and the reality that your time is valuable.

The calendar gives you the ability to subtly apply scarcity and urgency in a very real and believable way.

I see this with business owners that aren’t crystal clear on their priorities…they can get easily swayed into commitments that destroy their authority positioning.

Conversely, because they don’t have clear priorities (one of which being “build authority”), the actions needed to achieve the positioning you want never get done. I know these seem really obvious, but it trips up enough people that it’s worth making it conscious.

That brings us to #10…your associations. Or put another way, the crowd you hang out with. An attorney friend once told me, “You are who you travel with.”

And your market will see you as a peer with the people you associate with. Associate with other well-regarded authorities in your market. Not only will it elevate your positioning, it will expand your thinking and give you opportunities to interact with smart people, doing big things.

On the other hand, if you’re always “business visible” with small-time players you’ll be put in that category.

The Key to Creating Authority

Be intentional. You’ve now got the 10 tools of authority, but to bring it into reality, you must be intentional about the process.

Want to organize your thinking and your action? Attend our next free training session on developing your authority position.

Want my best ideas for growing your firm, plus winning ideas from successful firm leaders?

Twice a week I’ll send the latest actionable ideas to your inbox. Just tell me where to send them and let’s get some clients rolling in…

Steve Gordon is the host of The Unstoppable CEO Podcast, author of two books. He recently published a complete guide for landing clients without selling.
PrevPrevious ArticleThe real reason you’re not getting referrals
Next Article114 Top Podcasts for Entrepreneurs: What 53 of Your Favorite Marketers Listen ToNext